“Esther, by Any Other Name”

Esther, by Any Other Name

Something that I noticed, when reading Megillat Esther, is that one of the main characters has many different names. She starts off as Hadassah, and we quickly learn that she is called Esther. But it doesn’t end there. Sometimes the megillah refers to her as “Esther”. Sometimes she is referred to as “Queen Esther”. And twice, she is simply called “The Queen”.

When you compare Esther to the other people in the megillah, the contrast is apparent: Mordechai is always called Mordechai, and Vashti is always called Vashti. Haman is Haman, and his wife is always described as “Haman’s wife Zeresh”. Esther is different – why?

Many of the situations in which Esther is called “Esther” involve her interacting with Mordechai. Upon arriving at Achashverosh’s palace, Esther does not tell anyone that she is Jewish (פרק א, ב) . Esther discusses Haman’s decree with Mordechai, through a messenger (פרק ד). Esther puts Mordechai in charge of Haman’s estate (פרק ח).

Esther is twice referred to as “The Queen”. In one of these instances, she acts independently, and sends Mordechai clothing that he does not want. In the second instance, she does nothing at all – Haman is trembling before “The King and the Queen” (פרק ז). This second situation, in which Esther is entirely inactive, is very unusual. It does not sound like her at all.

Near the end of the megillah, when Haman is terrified of “the King” and “the Queen”, perhaps this Queen is not Esther at all. If Hashem is the King, then it makes sense for Bnei Yisrael to be queen. Haman finally recognizes that the turn of events taking place is not random – it is straight from Hashem, and intended to benefit the Jewish people.

The megillah shows us that Esther-The-Queen, and each Jewish person, has inside of them the strength of all of Bnei Yisrael. 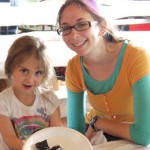